Saying hello is only monkey business, and it helps to keep that in mind. An attempt to combine zoology and business greetings. 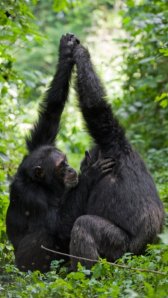 In a typical business english class, I’m often tasked with not just teaching the polite small-talk of pre-business meeting introductions, but also of persuading Germans that it’s necessary to use this rather subtle style of social interaction, rather than the relatively brusk german approach.

This is where the wonderful zoologist Desmond Morris comes in. In his book The Naked Ape, written way back in the 70s, but still brimming with anthropological nuggets, he posits that human greetings are an extension of our primate grooming instincts. An ape will approach with an extended begging paw while quickly smacking its lips, symbolising the act of collecting and eating the flakes of skin and parasites from the areas the other ape cannot reach. Many primates other than ourselves have also ritualised this grooming activity, using it as a social bonding exercise, and, perhaps partially due to our lack of fur, we have further transformed it into handshakes, waves, nods, bows, removal of hats and enquiries about states of health.

In Germany the firm handshake takes care of much of the grooming process, allowing Frankfurter financiers and Berliner bureaucrats to get straight down the the meat of the matter. Good for them, I say (I’m a big fan of directness), but how many other cultures hold such heavy stock in the old paw clasp?

The british, for example, have developed an elaborate greeting performance (in common with that other little island nation, Japan, where there is crucial significance in the depth and duration of the bow, resulting in a repeated series of “reply” bows, calling to mind an image of two nodding donkey pumps). In Britain, the overly direct handshake is either softened or often completely replaced by a complex, chattering dance involving asking how someone is, replying in the positive then asking back, also replying positively, then muttering about weather, inquiring about travel conditions, apologising for the paltry selection of snacks, and so on.

This exotically polite word ballet is often mistakenly assumed by the hapless german interloper to begin with a genuine health enquiry, thereby bringing the ritual to an abrupt halt with an honest medical assessment as reply, usually a complaint about a cold that is taking for ever to go, a lack of sleep the night before, backache, a stiff neck, or any other ailment that germans enjoy dwelling upon.

Bearing this in mind, my goal is to help my students understand the value of gauging the social grooming dance correctly. Each culture has cultivated our genetically programmed, furry urge to remove dead skin and ticks from one another into rituals that may vary, but they all serve the same purpose. A shake; a bow; a “How are you?” – “I’m fine, and you?”. Regardless of the culture, if all goes well, the result is metaphorically tick-free fur, and a social bond, with everyone ready to get down to business.

what’s it all about?

stuff people have been saying